Transversely excited atmosphere carbon dioxide (TEA CO2) lasers are unique in that they offer much shorter pulses and higher peak powers than conventional CO2 lasers. These properties allow TEA CO2lasers to emulate the better-known — but higher-cost — ultraviolet excimer lasers for some precision processing applications of polymer materials. For manufacturing engineers in the medical device, electronics and printed circuit industries who in the past may have relied on excimer lasers for polymer processing, TEA CO2 lasers can offer lower costs, higher throughput and simpler operation.

Both TEA CO2 and excimer lasers remove material by a process known as ablation. The energy of the laser pulse is deposited in a relatively short time — about 20 ns for an excimer laser and a few microseconds for a TEA CO2laser — and is absorbed in a thin surface layer. As a consequence, the temperature of the exposed material is very rapidly raised above its vaporization point and the material is “blasted” away in vapor form. Given the short exposure times, very little heat conduction can occur to the surrounding material. Ablated areas tend to have very sharp edges with little or no heat-affected zone (HAZ). This is in contrast to effects observed when processing polymer materials with conventional continuous beam or long-pulse CO2 lasers. With these CO2 lasers, significant thermal damage with charring, melting and resolidification will occur in surrounding material. Consequently, conventional wisdom says that CO2 lasers cannot be used for fine processing of polymer materials and that excimer lasers are the only option.

However, short-pulse, high peak power TEA CO2 lasers offer an alternative approach for processing of polymer materials with significant benefits of faster throughput, lower capital and operating cost, and simpler implementation when compared to excimer lasers. They can be particularly effective at selective ablation, where a polymer film is removed from an underlying metal layer. The polymer layer may be removed with little HAZ in the surrounding material and no damage to the metal layer, as metal is strongly reflective at these infrared wavelengths.

Typical energy densities (EDs) for ablation of most polymer materials are in the range of 5 to 20 J/cm2 for CO2wavelengths. When estimating process speed or throughput, a good number to assume is 20-µm depth of material removal per laser pulse with EDs in the normal range. The maximum depth of material removal that this author has achieved in a single pulse is about 60 µm at a very high ED around 50 J/cm2 in a pharmaceutical capsule drilling application.

Similar characteristics generally apply to processing with excimer lasers. Optimum energy density for excimer processing tends to be in the range of 2 to 4 J/cm2. For most polymer materials, absorption is much stronger at ultraviolet wavelengths than at infrared wavelengths. Absorption depth roughly equates to depth of material removed per pulse. A good rule of thumb for infrared ablation is 20 µm per pulse. For ultraviolet excimer lasers, because of the shorter absorption depth of most materials at ultraviolet wavelengths, the equivalent number is about 0.2 µm per pulse. Consequently, TEA CO2 lasers will give significantly higher rates of material removal and faster process throughput than excimer lasers, but excimer lasers will give better depth resolution. In terms of “raw” removal rate of polymer material, a TEA CO2 laser is at least an order of magnitude more effective than an excimer laser of equivalent power.

Depending on the application, excimer lasers may still be the preferred choice for several reasons:

Edge quality: With their shorter pulse durations and the higher absorption of many materials at ultraviolet wavelengths, edge quality or HAZ in most polymer materials will typically be better when processed with excimer lasers than with TEA CO2 lasers.

Feature size: Because of their longer wavelengths and higher divergence, diffraction effects determine that it is difficult to create feature sizes much smaller than 100 µm with a TEA CO2 laser and a simple optical beam delivery. With higher-quality optics, feature sizes as small as approximately 50 µm have been demonstrated (Figure 2). Excimer lasers, with their shorter wavelengths, can easily generate feature sizes to a few microns, and in extreme cases (lithographic applications), small fractions of a micron. 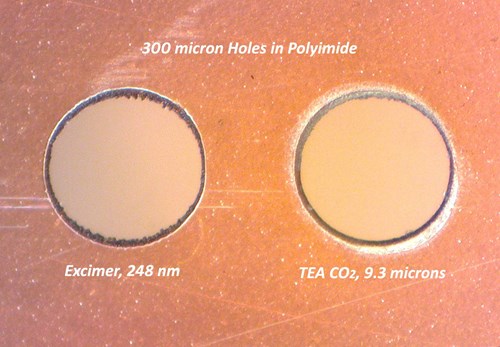 Excimer lasers and TEA CO2 lasers share a common characteristic of high beam divergence, which makes it difficult to focus their beam to a small galvo-mirror steered spot as is common with most other types of lasers. Instead, a fixed pattern — round or rectangular hole or some more complex pattern — is created in a thin metal “mask” or stencil; the mask is illuminated by the laser pulse and is imaged with a lens onto the workpiece. Users of excimer lasers will be familiar with this technique. 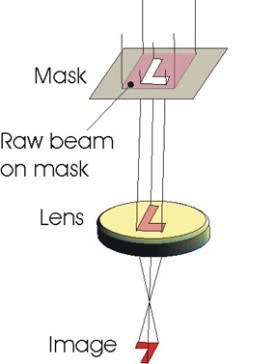 The default wavelength of CO2 lasers is 10.6 µm, although other wavelengths are available when special resonator optics are fitted to the laser. Brannon and Lankard of IBM2 were the first to point out in 1986 that the absorption of some polymers, especially polyimide, is much stronger in the 9.3-µm region than at 10.6 µm and that the process quality of such materials is greatly enhanced at the shorter wavelength. All LightMachinery Inc.’s Impact-series lasers supplied for polymer processing, for example, are set for operation at 9.3 µm.

Commercially available industrial TEA CO2 lasers typically offer average powers, measured as pulse energy by repetition rate, of a few tens to a few hundreds of watts. In this respect, they are comparable to many general-purpose industrial excimer lasers. Applications where TEA CO2 lasers can be considered as an alternative to excimer lasers include wire stripping, catheter drilling, pad exposure and similar precision polymer ablation in the medical device, electronics and printed circuit industries. Higher-power applications where excimer lasers would not be considered include drilling of controlled-release pharmaceutical capsules and tire-mold cleaning, removal of anticorrosion coatings at the ends of hydraulic brake lines, and paint stripping in the automotive industry.

A common application for TEA CO2 lasers is the stripping of fine wires as used in pacemakers and other implantable medical devices, and in magnet assemblies (Figure 4). Many manufacturers of these products tend to believe that only excimer lasers can produce sufficiently clean insulation removal. Although residue issues associated with TEA CO2 lasers preclude their use in some cases, in other cases they can produce results of acceptable quality at higher throughput — and lower cost when compared to excimer lasers. 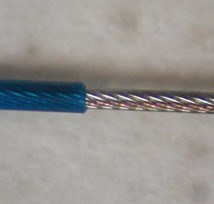 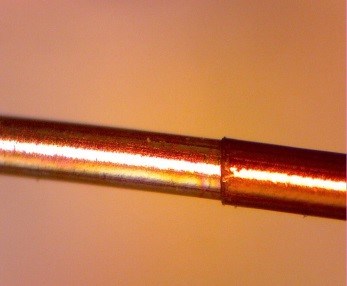 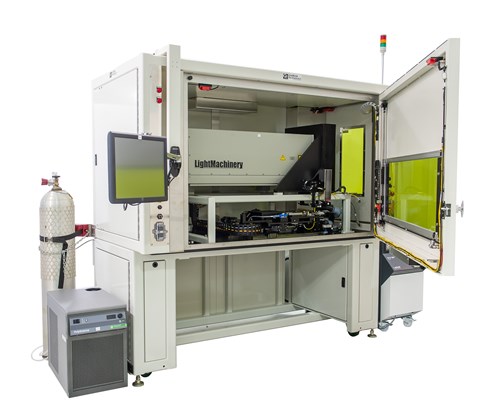 There is one issue that may limit the use of TEA CO2 lasers for polymer ablation in some applications.

Because of their longer wavelength and lower absorption, TEA CO2 lasers typically leave a thin, 1- to 2-µm residual layer of polymer when removing insulation from an underlying metal layer in applications such as wire-stripping and pad exposure. This may or may not be a problem, depending on the follow-on processes. If connections to the wire are to be made by crimping or spot-welding, the residual layer is generally of no concern. Soldering may be more problematical, as is plating to a pad in the printed circuit board (PCB) industry. The residual layer can be removed by a mild chemical wash — generally permanganate — which is a standard process for PCB manufacturers. Medical device customers may be more reluctant to adopt a chemical process. In such cases, dual-laser machines may be considered. These machines include both a TEA CO2 laser to obtain the benefits of fast throughput and low operating cost, with a small excimer laser to remove the final micron or two of insulation. In this case the power and duty cycle of the excimer laser can be very low, so the operating cost is acceptable.

On a dollars-per-watt basis, the capital cost of a TEA CO2 laser is approximately 50 percent of an excimer laser of equivalent power. The differences in the cost of operation are even more dramatic. A typical 80- to 100-W average power excimer laser in high-duty-cycle operation, such as ink-jet nozzle drilling, will have an operating cost of more than $20 per hour. That takes into account both the consumables cost, such as gas, and the amortized cost of replacement parts, such as the laser tube and other key components with typical lifetimes in the range of 1 to 2 billion pulses. On an equivalent basis, the operating cost of a TEA CO2 laser will be less than $2 per hour. When the lower cost of TEA CO2 lasers is combined with the order of magnitude increase in polymer removal efficiency, the case for the TEA CO2 laser is compelling in all instances where a TEA CO2 laser provides the required process quality.

Installation and facilities costs will also be lower for TEA CO2 lasers. Excimer lasers require the use of toxic and corrosive gases, particularly fluorine. This may present a health and safety challenge to some users and at a minimum will require the use of vented gas cabinets and fume exhausts. By comparison, the gases required for TEA CO2 lasers are relatively benign.

An excimer alternative — not a replacement An applications engineer who was very familiar with both excimer and TEA CO2 lasers once commented, “If you’ve ever used an Impact TEA CO2 laser, you’d never look at an excimer again.” That is an overstatement, because there are some applications where excimer lasers are clearly the preferred choice (Table 1). But in other cases, TEA CO2 lasers can provide an alternative to excimer lasers with acceptable process quality, lower costs, higher throughput and simpler operation.